It has been cold here the last few weeks and we have had some snow. We are lucky with the amount of snow that we have right now because many years we have much more snow than we do now. Rick and I have been trying to keep up our walks and keep getting out of the house and keeping busy. He is getting used to the snow and his boots. He has never really minded his coat but his boots are another story he was not fond of working in them at the start but he has really started to come around and works well in them. This does not mean that he cooperates fully when it is time to put them on however. When it is time for us to get ready to go out it is like I have a toddler all over again though. So that has taken some getting used to but I wouldn’t change it for the world.
Winter travel used to be quite the nightmare for me with the glare off the snow, the complete white out and the lack of land marks like curbs, corners, grass, gravel anything other than snow. I used to have a lot of anxiety about traveling alone in the winter I hated it, by the time I got to my destination I was so stressed. I was starting to stay in the house more and more especially in the winter and I hated it. I am not a home body at all. I hate being home for a long period of time I get very bored and need to go out and find something to do so when I started to stay home it made me miserable. Rick has really changed this completely I am not stuck in the house, I don’t have the anxiety about going out (so I don’t have to talk myself into leaving the house anymore ) I don’t feel the stress that I did when I used to go out. I can go out go where I need to go and want to go and just enjoy the ride. trudging through the snow isn’t always fun but it is great to have rick to trudge along with. The cold well he doesn’t really fix that but that’s just what you get in Saskatchewan. It will only get worse from here.
I have been doing a bit of crocheting to keep me busy because lets face it, it is cold and winter so there is not as much to do so I have had to stay home a little more and it is keeping me busy. It has been a challenge getting back into it, with the lack of vision but when you only make dish cloths and simple things it ends up doing the job. And plus I don’t sell them so no one needs to know they are not square ! *smile*
We have not been as active in our blogging and I would really like to try and get back at that and make it a priority because I love it and when I am feeling down it really helps me to get it all out.
We have been going into the city a bit with my husband and Rick does really well when we are out but the people are another story all together. And I always thought that kids would be the ones touching Rick when we were working. Boy was I wrong adults are the worst every time we go into the city someone will pet him or they say “I know he is working but he is so cute (bend down to his face) aren’t you so cute and such a good boy, oh such a good boy !” like really that is not distracting him at all like petting him would have. So annoying and then when you ask them not to pet or talk to him I am rude, and then you get those people that say but he looks so sad. He is a Lab he looks sad al the time ! I have even had to defend him wearing boots. It is not cruel he is far from mistreated the boots are to keep his pads from freezing or being burned from the salt on the roads so intact it is very considerate of me to put his boots on. And then there is the people that stare and take pictures, like I am not the circus and just because I can’t see you staring at me does not mean I don’t know you are staring and the people with me are all sighted so they see you doing it. PS my kids know it is rude so really grow up. I know that people don’t mean to be rude or at least I hope they don’t mean to be rude but I really want to go out and not feel like a freak or the three ringed circus.
That is my rant of the day !
But no matter what I will never regret getting Rick what he has done for me is more than anything I could have dreamed or asked for.
Until next time !
Ashley 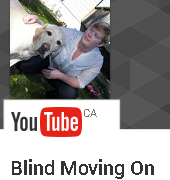